Imagine struggling to read a paperback? Perhaps the print is too small, or it jumps around the page. Visual impairment, visual stress, dyslexia and Irlen Syndrome can all turn reading into a pain rather than a pleasure. Although I’m not dyslexic, many of my relatives are, which is why I’ve also made my crime thrillers available in a large print, dyslexia-friendly format. The books are printed using: 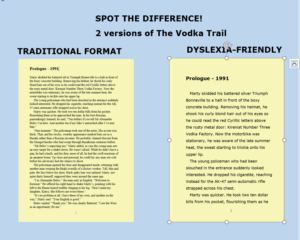 The books all have short chapters and a pacy story.

My guest blog in March 2017 for the Alliance of Independent Authors urged other writers to publish books in a format suitable for dyslexic adults, and I’m thrilled it’s starting to happen. You can see for yourself that a dyslexia-friendly edition is much easier to read. It isn’t just for dyslexics, either. Older readers may also prefer a crisp paperback that’s very easy to read.

Do take a look at the dyslexia-friendly editions of Bright Lies, The Bride’s Trail, The Vodka Trail, The Grass Trail, The Revenge Trail, The Final Trail, After The Interview and Up In Smoke.   These are Amazon UK links, but the books are also available on other Amazon websites – Amazon.com, for example.

All eight books are engaging, pacy thrillers. By far my darkest book yet, psychological thriller Bright Lies follows runaway teenager Emily to a city squat as she flees the man who’s stolen her childhood. Jack, a young DJ, gives her sanctuary, but even he doesn’t realise the cost of saving Emily when her nemesis closes in.

The Trail series are lighter crime thrillers about vodka and villains. The roots of the saga lie in the fall of the Soviet Union. Freed from Communist shackles, Alexander Belov becomes fabulously rich making Snow Mountain vodka. His family are left penniless, however, when he’s thrown into prison and dies in mysterious circumstances. Son Erik and daughter Kat claim asylum in England, where Erik concentrates on developing a cancer cure. Beautiful Kat parties hard, falling in with criminals until she finally decides that she too will build a vodka business. Even then, she can’t shake off the ghosts of the past.

Readers have compared the Trail series with John Grisham, Robert Galbraith, Ruth Rendell and Jeffrey Archer.  Each of the five books is a story in its own right, but together they follow the family’s fortunes over several years.

After The Interview, first published in 2014, is another cracking crime story full of unexpected twists. Jed Gardner, the high-flying CEO of an IT company, prefers computers, music and trains to human beings. His lack of empathy hasn’t just left him lonely and workaholic, it’s made him dangerous enemies. As their revenge unfolds, he stands to lose more than he can bear.

Up In Smoke, my very first book, shines a spotlight on the secretive world of Big Tobacco. Activist Susan Farrell goes undercover at a tobacco company. In her deadly adventure, she discovers too late that it isn’t just smoking that kills…

E-books, standard paperback, audiobooks or dyslexia-friendly large print – the choice is yours

All my crime thrillers are available as standard paperbacks and e-books as well. Don’t forget that font types and sizes can be adjusted on a Kindle to make the text easier to read. Bright Lies is also published in audiobook and library large print formats. The choice is yours!