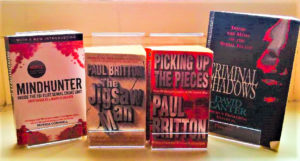 Sometimes, the most gripping crime stories are true tales written by the law enforcers charged with bringing criminals to justice. The Netflix show, “Mindhunter”, cast a spotlight on psychological profiling, a relatively recent weapon in the fight against crime.  Qualified psychologists on both sides of the Atlantic have written about their successes in solving cases by getting under the skin and into the brain of an unknown perpetrator.

Their skill produces uncanny results. John Douglas, writer of “Mindhunter”, tells the cops to look for a man with a speech impediment. When they get their man several murders later, he turns out to have a stutter. How spooky is that?

In fact, he isn’t the first stammering killer John Douglas has encountered, and he won’t be the last. Douglas’ book and similar chronicles from British psychologists David Canter and Paul Britton, reveal that many serial killers are stamped out of the same mould. They‘re socially inadequate, with a history of bed-wetting, fractured relationships and minor sex offences. As their experience and confidence of delinquency grows, their activities increase in severity. Douglas, Canter and Britton practically provide a template for a serial killer, and I’m sure some fiction writers use it.

All three writers briefly explain how they became involved in this line of work, then get into the real meat: a detailed account of cases they’ve solved. Douglas also built his knowledge by interviewing serial killers who had already been captured. Bored after long years inside the prisons where they would see out the rest of their lives, many agreed to talk to him.

Based in the FBI’s special unit at Quantico, Virginia, John Douglas inspired the Silence of the Lambs as well as his own Netflix series. His case studies – based on the maxim familiar to HR managers, that past activities predict the future – are interesting and well-written. The only downside is an occasional hint of arrogance. This is not the case with Paul Britton, who has a more self-effacing, perhaps typically British, approach to his abilities. In his first book, “The Jigsaw Man”, he includes a chapter on a case where he was unsuccessful. When a beautiful young model, Rachel Nickell, was murdered in a London park, Britton’s lengthy and expensive sting operation led to the arrest of the wrong man. It is sad that, twenty years later, Britton is still pilloried by the media for this failure. He’d applied scientific rigour in the case and had made it clear that it wasn’t open and shut. It unfortunately overshadows his numerous successes. For instance, his work was instrumental in bringing murderer Rose West to justice and to identifying Michael Sams, who held estate agent Stephanie Slater as a hostage in a wheelie bin and killed another woman. Britton’s “The Jigsaw Man” is a thrilling read, as is its sequel, “Picking up the Pieces”.

David Canter, another Englishman, was heavily influenced by the FBI’s techniques. His book, “Criminal Shadows”, is more academic than the others, but still a page turner. The chapter on Criminal Maps – plotting the location of crimes to identify the villain – is especially compelling. Thanks to him, police arrested London’s evil Railway Rapist (who also murdered three women) and the young Brummie sex offender who dragged his OAP victims onto the roofs of tower blocks.

All three writers offer fascinating insights into the criminal mind, as well as an entertaining read. Even if fiction is usually your bag, you’ll find Douglas, Britton and Cantor have plenty of true tales to interest you.

I’m an English crime thriller writer, and invested in these books as research: to understand how a serial killer thinks. Not all fit the socially inadequate sex offender model – some are charming psychopaths, while others fall under the spell of a sadistic lover. One day, this research will find its way into another tense and twisting crime thriller, so do sign up for my monthly newsletter to find out more! You’ll also receive a free e-book of short stories.