Angela Marsons’ tough but tortured Detective Inspector Kim Stone featured in my blog in April. Ironically, only 6 miles from Kim’s base in the Black Country, Colin Ward’s DI Mike Stone is operating out of Aston CID. Are they perhaps related?

Another detective with a troubled past

I sometimes think Ruth Rendell cornered the market in crime stories about happily married detectives with her Wexford series, set in rural Sussex. Kim and Mike Stone, in the dynamic and densely populated West Midlands, face completely different personal and professional challenges. Just like Kim, Mike lives a single life, has a troubled past and is tasked with tracking down a serial killer. That’s where the similarities end. Mike is by no means a loner. He enjoys the buzz of managing his team of sleuths. The pages of the book crackle with the excitement of the incident room as ideas are captured on the whiteboard and underlings despatched to follow leads. A depraved murderer is slaughtering young mothers, and Mike must find him before more families are smashed apart. There is a heavy focus on police procedure. This is fascinating, yet doesn’t detract from the rising tension when more bodies are found and the killer begins taunting Mike with texts.

Twists in the tale

Birmingham provides a kaleidoscopic background to this thriller, from smart bars to parks to the sprawling estates that ring the city’s outer perimeter. I suspect anyone who knows Brum will work out how the killer is transporting his victims well before the nerve-racking showdown. However, other readers are unlikely to guess. There are still plenty of twists in the tale. For example, although Colin Ward sprinkles clues throughout the book, it was an agreeable shock to me when the killer was finally unmasked. I didn’t see it coming. 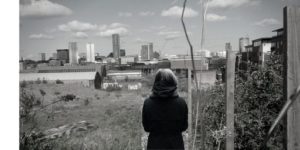 Carries the reader with it until the very last word

The book isn’t perfect – as a writer myself, I tend to spot typos and repetition, and I found a couple of dozen. However, the story is well-written and so compelling that I couldn’t stop turning the pages. Mike Stone’s life, sanity and love hang in the balance unless he can stop the killer. To Die For carries the reader with it until the very last word.

Birmingham is a fascinating backdrop to Colin Ward’s book, and it also features in three of the tales in my short story collection, Something In The City – get it free here